Older Americans retiring to rural areas quickly integrate in their new communities and bring significant social and intellectual capital to those communities, finds a new issue brief from the Carsey Institute at the University of New Hampshire. The brief is among the few studies to consider social rather than economic impacts of older in-migration to rural areas. "Of the ten percent of Americans over 60 who moved between counties from 1995 to 2000, a disproportionate share moved to rural communities," says report author Nina Glasgow, a senior research associate in the Department of Development Sociology at Cornell University. "If this trend continues as more Baby Boomers reach retirement age, older newcomers will continue to have a major impact on some rural areas." Glasgow and co-author David Brown, a Cornell University professor of development sociology, director of the Community and Rural Development Institute and associate director of the Cornell Population Program, note that rural retirement destinations (RRDs) -- a U.S. Department of Agriculture designation for the 274 nonmetropolitan counties that experienced net in-migration of 15 percent or higher among persons 60-plus between 1995 - 2000 -- are one of the only types of nonmetropolitan counties in the country experiencing consistent population growth during the last 30 years. Conducting surveys in 14 RRDs spread across the country, the authors found that concerns about social isolation among older in-migrants were largely unfounded: Older in-migrants quickly became involved in their new communities. Their levels of social integration closely matched those of similarly aged persons who had lived in RRDs for more than 20 years, and by 2005, in-migrants were more likely than longer-term residents to participate in service, social and volunteer activities. Further, one-third of older in-migrants had at least one adult child living within a half-hour drive of their new home (compared to almost 50 percent of longer-term older residents). While many studies have examined the economic impacts of older in-migration, this Carsey brief considered the social impacts of older in-migrants on rural communities. The brief finds that older in-migrants have a positive effect on real estate and construction; provide financial and technical assistance to civic endeavors; and invigorate the cultural scene. "Many of these benefits have associated costs, however," says Brown. "Rising real estate prices can diminish affordable housing, for instance, or older in-migrants who assume positions of community leadership might be insensitive to the traditional ways of doing things." The authors conclude that older in-migration should be seen as neither a burden nor a boon for rural areas but rather as a source of both challenges and opportunities. They recommend that communities can maximize opportunities by

"The 'grey gold' that older in-migration represents, particularly as Baby Boomers enter older age, should be considered by public officials and community leaders in these RRDs from a balanced perspective," says Glasgow. 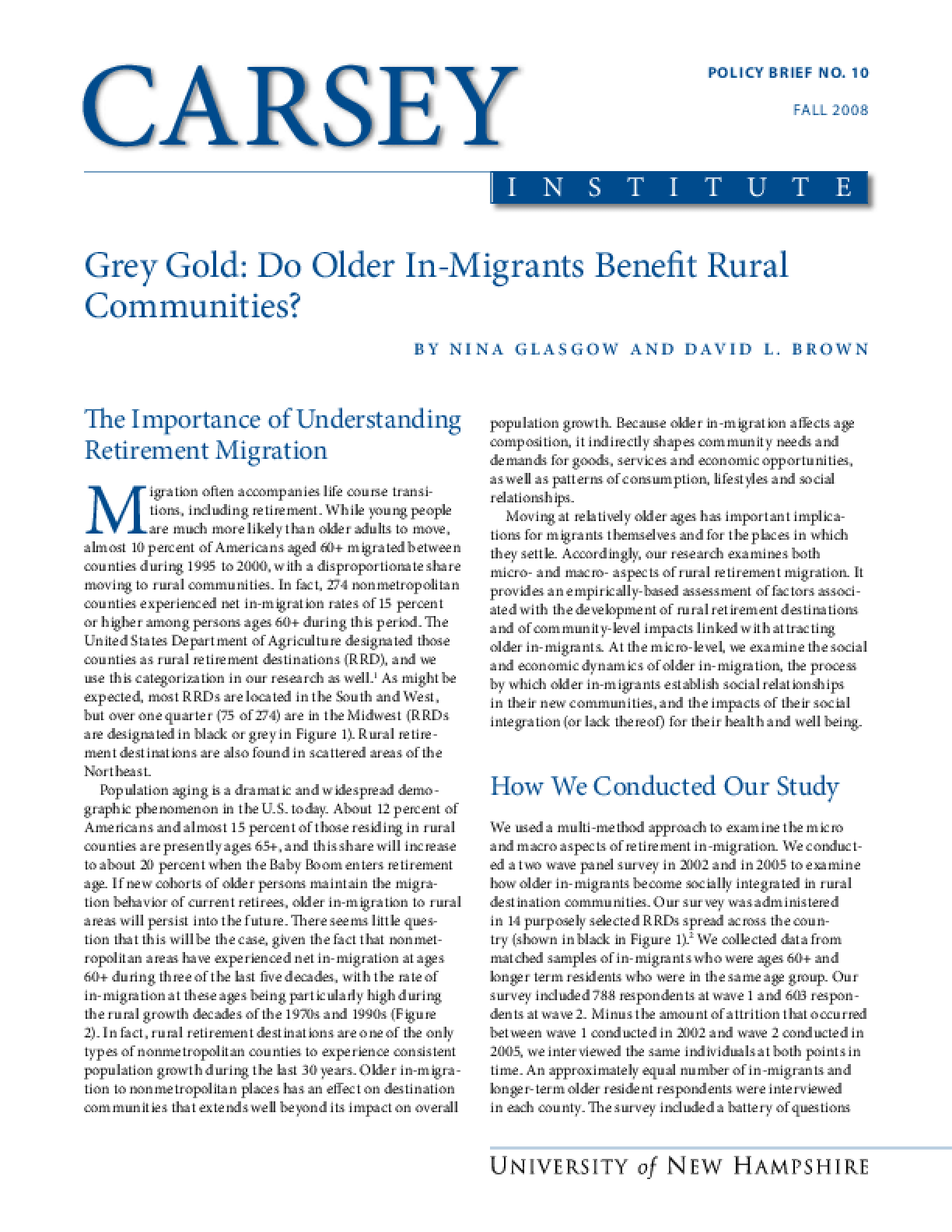